Oil and water don’t mix. This is why a bottle of French Dressing has to be shaken before use and why, when an oil tanker sinks, the oil that is spilled can be scooped off the surface of the sea.

The tendency of oil molecules to avoid mixing with water (called hydrophobicity) is very common and has many effects and applications. Soap and detergent contain molecules that have an oily (hydrophobic) 'tail' and a water-loving  (hydrophilic) 'head' so that when a greasy plate is washed the oily tails bind to the grease and the heads bind to the water, forming microscopic blobs of grease that are happy to disperse in the water. The  membrane enclosing cells in all living things are formed from similar molecules, which organise themselves to form sheets so that they can bury their water-hatings tails inside the membrane, and exposing their water-loving heads to water on the outside.

Now a group of Physicists in the Centre for Science at Extreme Conditions at the University of Edinburgh have shown in a paper in Science Advances that there are circumstances where a water-hating molecule can be made to mix with water. They studied water and methane (the simplest possible oil and the major component of natural gas) at pressures up to and beyond 20,000 times atmospheric pressure (20 times higher than the pressure at the bottom of the Ocean – Marianas Trench). A  mixture of methane and water 0.1 mm in diameter and 0.05 mm thick was squeezed between two diamonds and the behaviour was observed under a microscope. At low pressures methane and water don’t mix and, as the left hand picture shows, droplets of methane surrounded by water form. As the pressure is increased above 13,000 atmospheres the methane droplets start to shrink and eventually disappear, so that the sample becomes a uniform liquid mixture of methane and water as shown in the right hand picture. The Edinburgh team were able to estimate the amount of mixing from the relative areas of the droplets in pictures like the left hand one. They found that the amount of mixing increased from less than 1% at 13,000 atmospheres to almost 50% at 20,000 atmospheres, so that 4 of every 10 molecules in the mixture is a methane molecule. 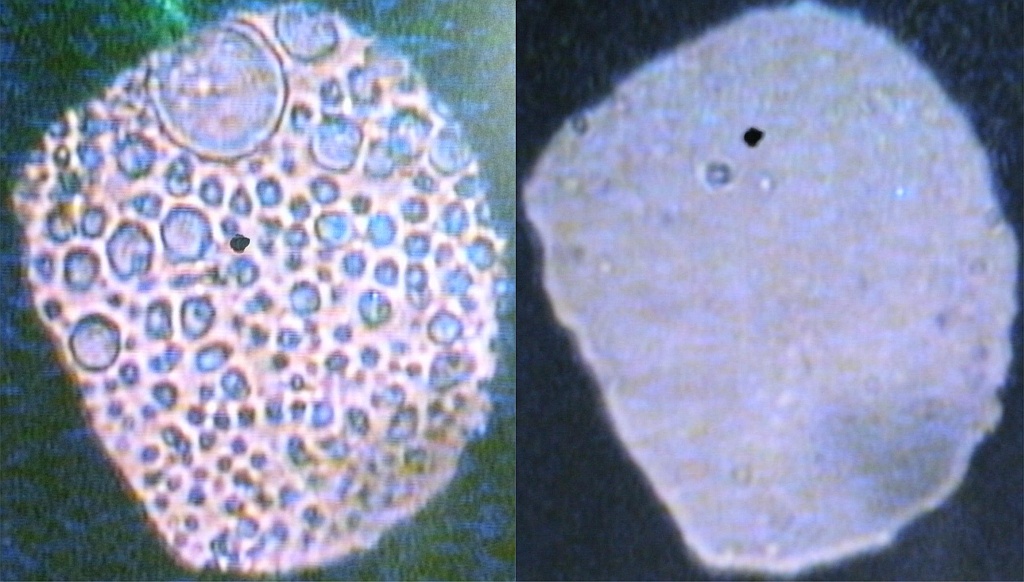 Discovering conditions under which oil and water do mix has far-reaching implications. Methane and water occur widely throughout the solar system: within the Earth, in Neptune and Uranus, and in Titan and Triton. The new finding from Edinburgh will therefore enable scientists to build more accurate models of these planets and satellites. The finding also offers possibilities for the green agenda: it holds out the prospect of extending considerably the range of what is surely the greenest of all solvents: water. To make this practicable, however, further research is necessary to reduce the pressure at which oil-water mixing can occur. Meantime, the discovery has given scientists a simple system in which the love-hate relation between water and oily molecules — which is important for everything from washing up to life itself — can be 'tuned' at will and so probed and understood in new ways.